Mason’s team looked at the data from 2000 to 2016 to see if there was an increase in registered voters who didn’t vote because they didn’t like either candidate in the presidential race.  “We found there was a rise in people who didn’t vote over the years because of dislike for the candidates,” Connor says.

The group was then tasked with coming up with a way to improve voter turnout, and they suggested ranked-choice voting in which voters rank candidates by preference on their ballots, she says.

Connor says the project gave the students a chance to work closely on a statistical analysis. “I learned a lot about how to go from start to finish with a statistical group project.”

Elizabeth Johnson, an associate professor of statistics and the group’s sponsor, says, “This national competition allows students to work in teams to investigate current issues using real data, They experience the whole research process of creating a research question before collecting, analyzing, and reporting on data. I am very proud of their accomplishment in a very competitive field." 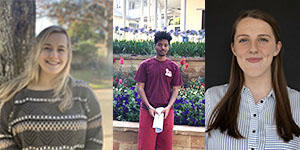 Four senior students from the Department of Statistics received an honorable mention for the best use of external data at the American Statistical Association’s (ASA) Fall Data Challenge 2020. Pictured from the left are Shannon Connor, Nate Mulugeta, and Emily Litzenberg. Kate Lang is not pictured.